In August 2014 I found a severe cross-site scripting security vulnerability in the latest version (1.13.0) of the ‘jQuery Validation Plugin‘ during a security penetration test for a customer. This jQuery plugin which adds easy form validation functionality to a web site, is written by a core developer of the highly popular jQuery JavaScript framework.

As of speaking this vulnerability still exists and hasn’t been patched. It seems that on first sight 6.000+ web sites are vulnerable. jQuery hasn’t responded to my report of this vulnerability. That’s why I chose for full public disclosure, so other jQuery users can inform themselves about the safety of this validation plugin.

August 20, 2014
I reported this vulnerability to the developer of this plugin via his personal e-mail address. Did not get a response from him.

September 8, 2014
Sent him a reminder. Still got no response.

November 7, 2014
As a last resort I disclosed this vulnerability to the generic jQuery functional e-mail account ([email protected]).

November 13, 2014
Notified the generic jQuery e-mail account and the plugin developer about my intention to publicly release this vulnerability in the upcoming days. Again I didn’t get any response on this e-mail.

Apparently I’m not the only one who didn’t get any feedback from this developer.

After 7 months (!) the developer responded to this bug report and closes it a few days later:

I was shocked. This vulnerability is known since June 2011. That’s already 3.5 years. The developer thinks it’s “not a big deal”.

When I perform a security assessment as part of a quality assurance process, most of the time this kind of vulnerability poses a high security risk to a company. Such security finding is blocking a new software release from going to production from a security policy point of view. So, that’s certainly a big deal.

By looking into the vulnerable source code of the jQuery Validation Plugin, I found a text string that would indicate candidate sites that might be vulnerable. Google returned 12.100 search results when searching for this string:

Google returned 257 entries when searching for the default location of the vulnerable file:

It’s frightening to know that it’s only a tip of the iceberg of what Google can find. There will be a lot more vulnerable web sites than the 12.100 + 257 web sites that I quickly found via a simple search query.

12.000+ pages seem to be vulnerable
When browsing through a few search results, I quickly found multiple vulnerable web sites. First impression is that more than 12.000 pages are vulnerable to cross-site scripting. That translates to about 6.000 web sites. That’s serious! 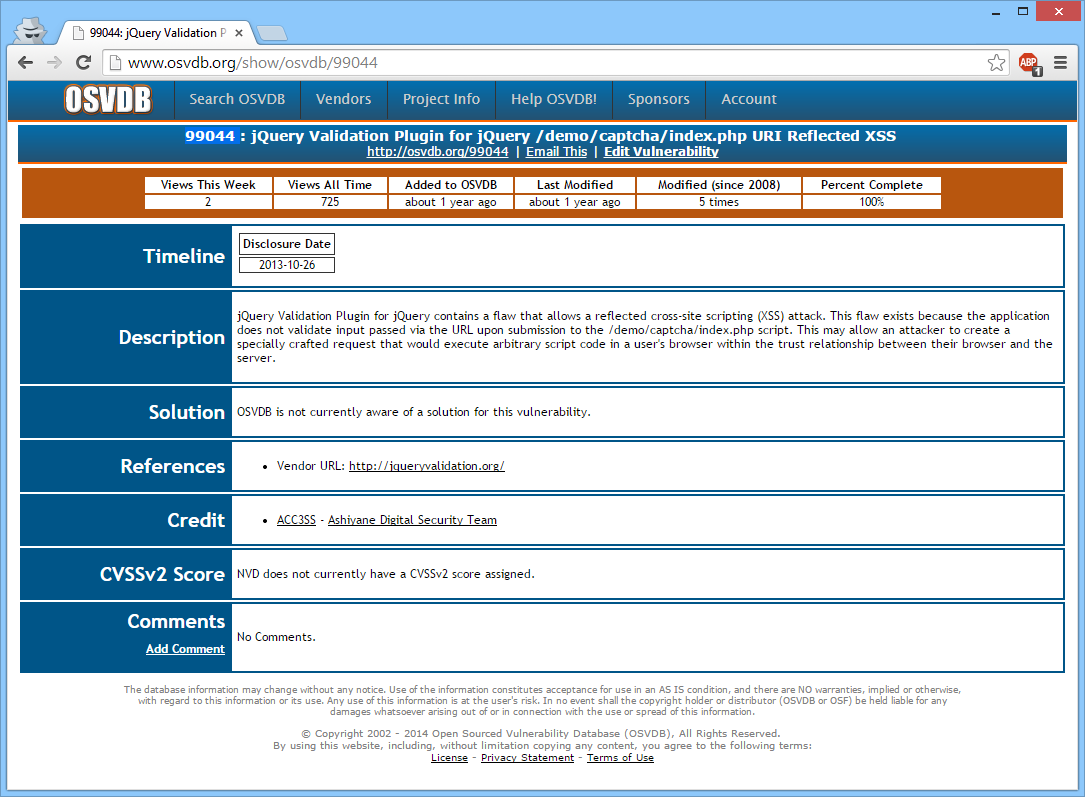 Clearly I’m not the first security researcher that found this problem, and certainly not the only one who worries about it.

Sadly, the plugin developer seems to be careless about security and leaves his software and users vulnerable. Even after multiple security researchers expressed their concerns to him.

The vulnerability exists in a CAPTCHA demonstration script.

Location
On line 69 in /demo/captcha/index.php the PHP variable $_SERVER[‘PHP_SELF’] is printed without any user input sanitation:

Evidence
The following HTML will be printed by the web server:

The injected JavaScript code ‘<script>alert(1)</script>’ will be rendered by a web browser:

Impact
With this severe vulnerability session hijacking is possible in most cases via a reflected cross-site scripting attack, which can result in identity theft (if session cookies aren’t protected via HttpOnly).

Solution
When installing or maintaining the jQuery Validation Plugin, remove the ‘/demo/’ folder entirely. Most of the time you don’t need this demonstration script anyway.

When you’ve copied and implemented this demonstration script, then use PHP’s function htmlEntities() to secure it:

On line 66 in file /demo/captcha/index.php, the following credits are given by the author of the jQuery Validation Plugin:

Perhaps he didn’t introduced the vulnerability himself, but copied it from the original author of the CAPTCHA script. Too bad that the mentioned web site in the CAPTCHA script is offline. But luckily Google doesn’t seem to forget anything:

One of the search results pointed to a forum post from April 5, 2009, which quotes part of the original CAPTCHA code:

As it seems, the cross-site scripting vulnerability was introduced by the developer of the CAPTCHA script and not by author of the jQuery Validation Plugin.

When browsing further through the search results, I’ve seen instances of this CAPTCHA script that date from 2007. This is confirmed by looking at the Wayback Machine from the Internet Archive for http://psyrens.com/captcha/:

I’ve managed to obtain a copy of the code of the original CAPTCHA script via the Wayback Machine dated from March 24, 2007.

This vulnerability was introduced probably around eight years ago and copied to all kinds of web sites and software products.

When browsing through the archived web site where this CAPTCHA script originated from, I discovered that the author of this script was probably 17 years old when he created it: 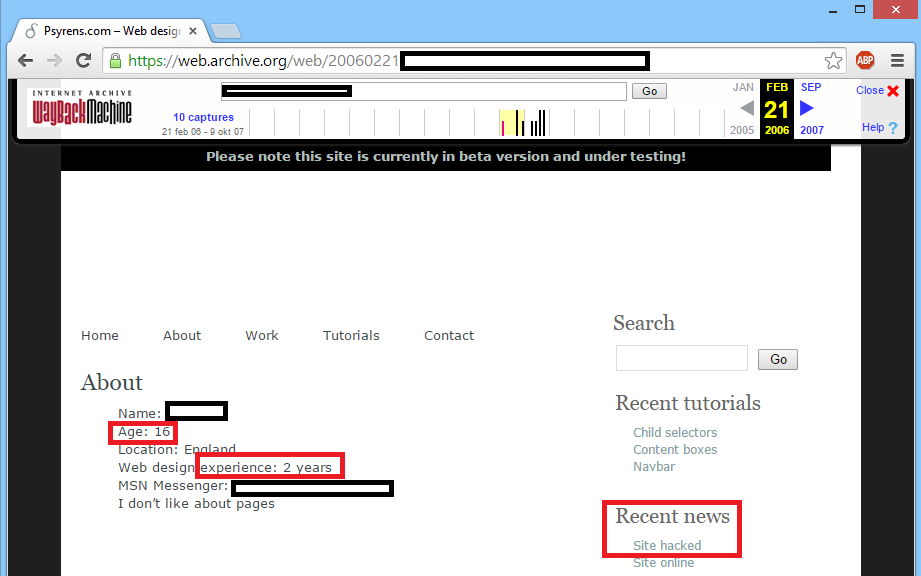 (A funny detail is that the site stated that it had been hacked recently. I’ve put a screenshot of the accompanying news article below) 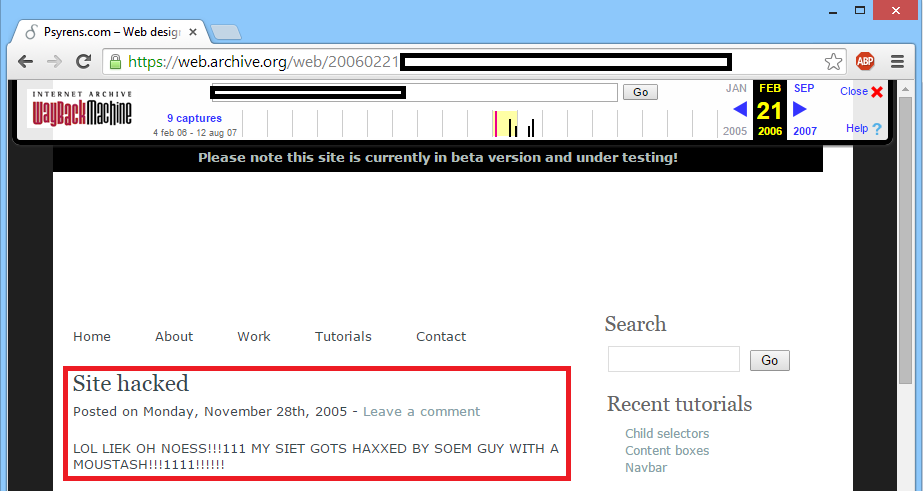 This security bug seems to have spread to tens of thousands of web sites since its creation. It’s a wild guess, but I would not be surprised if there are around 20.000 web sites affected by this security bug.

The jQuery and CAPTCHA authors are certainly not the only one struggling with this specific cross-site scripting vulnerability as Google again shows us:

Combined the above search queries returned 322.300 results. An astonishing amount.

Note that server side running PHP source code is never published on a web site, so all those Google search results display web developers that are talking about their code and showing their code to others. That means that the PHP code that Google found is running on millions of websites. And thus a large amount of those web sites have cross-site scripting vulnerabilities (!). That’s a big problem.

What started as a vulnerability that seemed to be only active in one product where I performed a security test on, soon became larger (jQuery Validation Plugin) and larger (a CATPCHA implementation) and uncovered quite a story behind it. This story is about taking responsibility for any code that ships with your software and taking security serious. This story is also about knowing where your code came from, who wrote it and the habit of blindly copying code with all kind of security implications.

At this moment, there are millions of web sites vulnerable to cross-site scripting attacks. The most shocking part is that all those web site owners don’t even know about it and think their web site is safe. We still have a lot to accomplish to get towards a web that is safe.