A new type of service has become available on the open internet. The Rentyouraccount.com domain claims that it provides a market place which allows people to rent and purchase accounts.

The accounts can be anything, a Reddit user claimed that he and his friend received an message which claimed that 100 dollar will be paid for an Facebook profile with full credentials, the message continues to explain that the Reddit user will obtain a Raspberry PI from the sender and that the Raspberry PI must be connected to the home network.

The first reason is the fact that they need your credentials – this is very weird. Each person, just like yourself is capable of creating an account on Facebook. Why would they (the scammers) need an “anonymous” Facebook account?  They don’t. The scammers need an full updated Facebook account which will allow them to perform malicious deeds. Once the deeds has been performed, the scammers will simply end the rent and the official user will get the government agencies on his/her ass.

These type of services can be compared to Money Mules marketplaces.

NEVER GIVE YOUR CREDENTIALS TO ANYONE. IF THEY PROVIDE YOU 100 DOLLAR, JUST BE SURE THAT THEY WILL MAKE AT LEAST A 1000 DOLLAR VIA THE “RENTED” ACCOUNT. 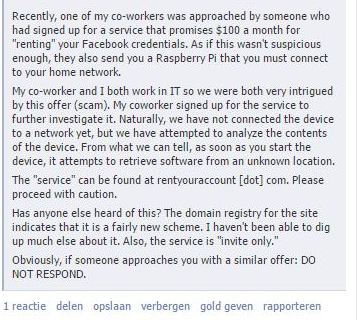 If you really need an free account take a look at the FREE bugmenot service. This service contains thousands of accounts which have been setup to be shared.